One of the current projects I'm involved with is been working behind the scenes with the fine folks at Rising Star Studios on their property, ArmorQuest. We’ve been kicking various things around with ArmorQuest for a while and we’re now at a point to start getting this material out there. We've recently launched the website, ArmorQuest.com, and have just released our first digital graphic novel, ArmorQuest: Genesis.

ArmorQuest tells the story of a young man named Timothy who finds himself on a quest to join the ranks of the Emperor’s elite force, the Knights of the Way. He sets out with nothing but a sword, a pair of allies, and a hope to one day return home as a hero and save his friends and family from the threat of the dragons. He faces many challenges and dangers on his journey, but through it all, he learns to rely on the tools of the Emperor, the armor of the Knights of the Way.

The story begins with ArmorQuest: Genesis – a graphic novel now available for digital download through Amazon and iTunes. Written by Ben Avery with fantastic art by Sherwin Schwartzrock. 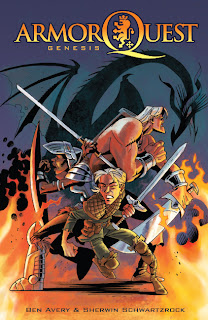 Posted by Bud Rogers at 9:01 PM No comments: